HitTrax® is a baseball and softball simulation system that provides a powerful combination of performance data and entertainment value. HitTrax® designed the system with (1) the goal to revolutionize the game by providing advanced metrics across all facets and levels of the game and (2) to create an engaging experience that will allow players to interact with the game in a way never before possible. HitTrax® accurately measures the speed and trajectory of the ball while calculating the realistic outcome. Players are playing in their favorite stadium while practicing their swing and competing with their friends. Welcome to Complete Game of PA’s HitTrax® performance training. Come in and start your HitTrax® training today.

What does HitTrax® do for our players?

Schedule an initial 30 minute training session to capture your baseline metrics, such as  exit velocity, launch angle and point of impact. The initial baseline test will be conducted by a staff member through a series of tee swings, front toss and live swings to determine overall swing mechanics.

Players can schedule HitTrax lessons to start tracking their progress with each HitTrax® training session. Players, parents and coaches will recognize detailed aspects of the player’s swing and work to make the needed adjustments. A report is generated each time summarizing the gains accomplished for each measured metric and calculated statistic and distances.

Each HitTrax® lesson session will: 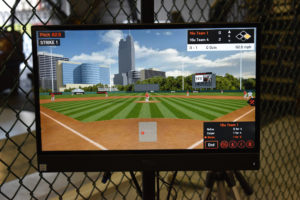 Complete Game offers the entertainment mode to our VIP Members. Outside teams renting in the winter should inquire about this add on service. Here is how it works.

The entertainment module sets a creative basis for players to use and explore different aspects of baseball in your favorite college or professional ballpark. Whether it be a 2 inning game, home run derby, hitting contest or batting practice with friends, the HitTrax® entertainment mode offers it all for players. The competitions are fast paced to keep everyone involved, which leads to a quicker turnaround time, allowing more players to experience our HitTrax® entertainment. “Our VIP members are constantly in our HitTrax® cage maximizing the # of swings they can get with each session”.

Complete Game offers Complete Game Travel Teams and our VIP Members the ability to play baseball games in the HitTrax® Gaming Module. Here is how it works.

This module is a ‘pay as you play option’ costing $5.00 per single scheduled games. Our members can build teams with a group of players (we recommend 2-4 players) to play games against each other. The program will lead the two teams through a game by automatically calling balls & strikes (based on an individual player’s height), advancing base runners and turning double plays. Individual and team statistics as well as leaderboards are automatically recorded and can be emailed directly to the players from within the program. A typical 9-inning games can last between 30 to 45 minutes. Six innings/30 minutes games are available for a faster turnaround or to accommodate games within hitting leagues follow scheduled times.

Call today to set up a tournament for your outside group or look for an upcoming Complete Game tournament.

Join one of our HitTrax® leagues for youth, high school and adult players. Please call to enter your team or ask about an upcoming league.